Running of the Chicago Bulls Returns to Spain After Two Years 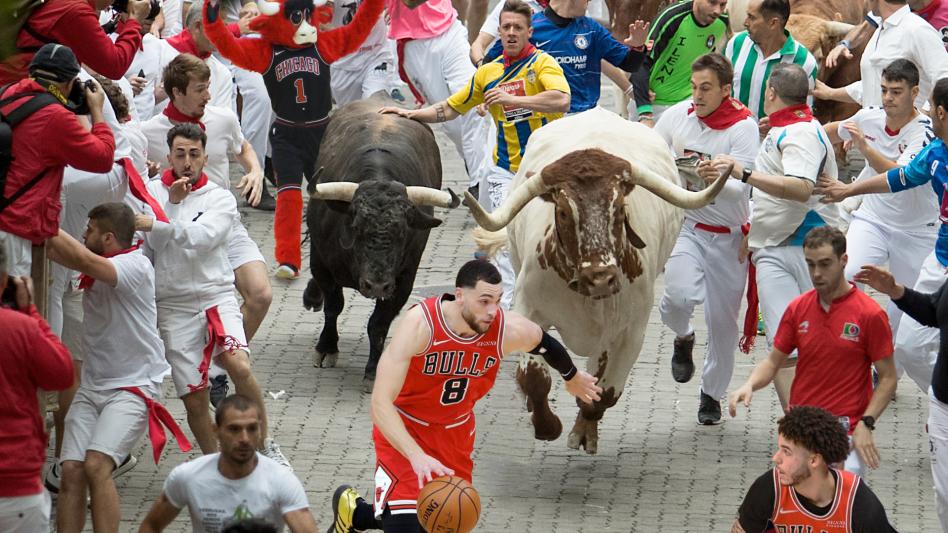 PAMPLONA, SPAIN — Last week saw the return of the running of the Chicago Bulls to the streets of Pamplona. The dangerous—but cherished—tradition, called an encierro, hasn’t been celebrated for the past two years due to the COVID-19 pandemic. But last week, brave runners took to the streets to run with the Chicago Bulls, risking injury or even death as they try to keep pace with the NBA basketball team.

“The people of Pamplona cherish the tradition of running with the Chicago Bulls,” said Will Bryen, 56, the Chicago Bulls international liaison, “and after two years away, the Bulls are excited too. They’re ready to get out there, chase some Spaniards around, and have a good time.”

This year’s running of the Chicago Bulls saw the team running with hundreds of revelers, following a path through the streets of Pamplona. Several injuries were reported, including several concussions caused by runners being shoved into walls by the basketball team, and at least two gorings by Benny the Bull, who leads the annual charge. Some even suggested the long break between the last two events caused more injury due to excitement on the part of the team and the runners.

“It was great to get back out there,” said Bulls point guard Lonzo Ball, “we left it all on the cobblestone. I was kicking people left and right, I saw Nikola [Vučević] pick up a guy up over his head and just throw his ass. Man, I really missed this. I can’t wait to get some tapas after our siesta. I love Spain!”

“The team was in great form today,” said Billy Donovan, coach for the Chicago Bulls, “back to the fundamentals. It was my first run with the team and I was proud to see them hustle. I’ve been working with Javonte [Green] on his trampling and he was really putting in the footwork today. If they keep this energy going into next season, we might have another championship—or maybe a lawsuit—on our hands!”

Despite injuries and a confrontation between local police and an enraged Benny that required several nets to diffuse, Pamplona reports this year’s running was a massive success for both the event planners and the town, which relied on tourism before the pandemic.

“The people of Pamplona thank our guests, the esteemed Chicago Bulls.” said Enrique Maya Miranda, mayor of Pamplona, “Not since the ‘92 ‘equipo de ensueño’ when Michael Jordan dunked someone into a trash can has Pamplona had such an exciting encierro. Thank you for bringing the excitement of the basketball court to the streets of Spain once again.”

As of presstime, the Bulls were preparing to return to Chicago along with the Chicago Bears, who are returning from a month-long residency at San Francisco Pridefest.