Chicagoan Not Sure if It’s Debilitating Social Anxiety, or if They Just Have to Take Two Buses to Get There 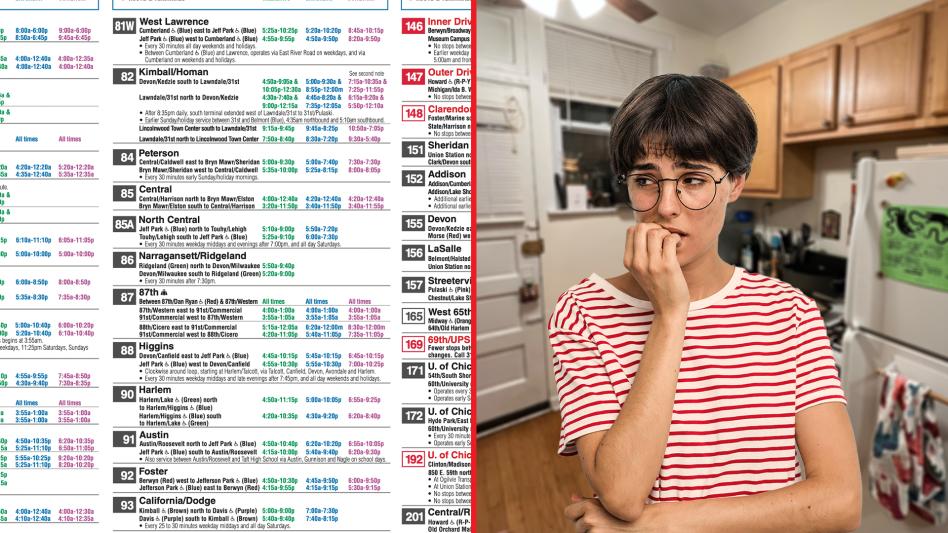 LOGAN SQUARE – Anxiously double checking the tracker app. Sweaty palms grasping hold of the cord to indicate the next stop. Crossing four lanes of traffic to wait in the cold for a bus that may or may not arrive. The wind cuts through your coat as you shiver in the street. Is it worth the 45 minute catch-up over beers?

Sloan Cameron, 34, has been stewing on an invite for the past few weeks now. One friendly obligation to grab drinks with an old friend from college is sitting in their Google Calendar, collecting virtual dust. They enjoy their friend’s company, so why do they feel dread at the prospect of this encounter? The answer, as always, lies in the damned CTA.

‘It’s like the people who designed this city couldn’t fathom a reason why someone living in Lakeview would be friends with someone in Logan Square.” Cameron opined, refreshing the Ventra app like a person on the verge. “Is it really worth it?”

Transit psychology expert Nathaniel Jenkins says more often than not, it isn’t worth it. “Human beings would rather spend double the amount of time on one form of transportation than leave it up to the Gods of the Commute to grant them short wait times in between. We are a fickle species, indeed.”

“At first I was just like ‘oh, I don’t want to hang out with people because I’m a hermit with the social capacity of a walnut’ but I think I just really, really hate having to transfer from one bus to another.” Cameron admitted to our reporters. “I would rather never speak to anyone again than wait for the 82 after already going through the emotional labor of catching the 80.”

Cameron tried diligently to put a positive spin on things.“Good news is that I used up all my anxiety about getting there on time, and now I can handle any social faux-paus that may arise!” Our reporter politely suggested that instead of two buses, they could take one bus, and walk the additional twenty minutes. Cameron eyed us suspiciously “Um, nope. Not gonna do that.”