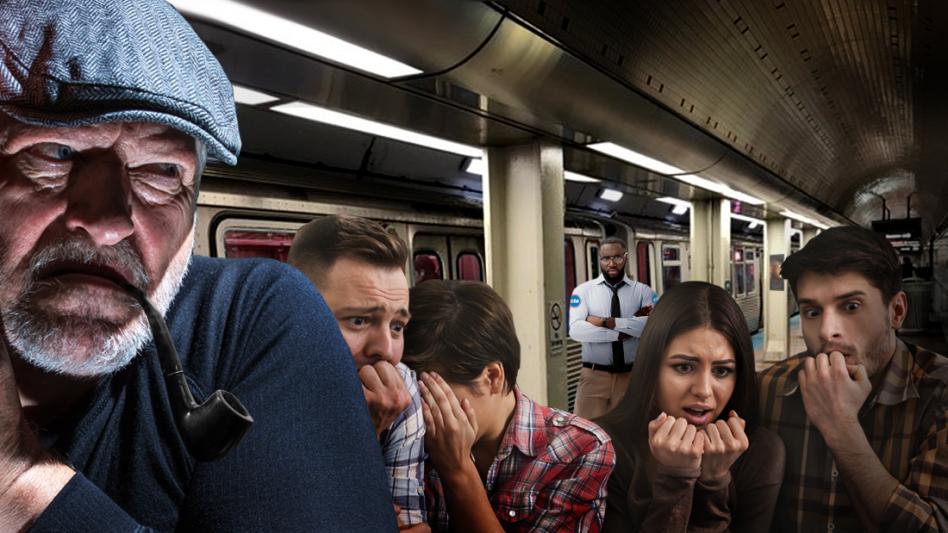 RIVER NORTH — Settling onto a bench at Grand Red Line station, a grizzled rider of the CTA regaled riders waiting on the platform with a tale of terror and woe: the legend of the Express Train that never ever stops. The eerie story was told to waiting passengers, including this reporter (who, full disclosure, was on a date that went very well. I had a very good Thai curry) as they waited for the train to arrive.

“T’ain’t no reason to be lookin’ up at the screens, friends. At this time of night the trains become wilder, more unpredictable. They say at this time of night the express train that never, ever stops roams these tracks, not pickin’ up passengers, just leavin’ folks standing in the cold, frustrated and delayed.” said the wizened old man, inviting those waiting to sit around him, hearing his tale.

“They say the train is cursed to never, ever stop, to just go from one terminal station to another in an endless loop, doomed to forever disappoint riders with increased wait times!” Several spooked passengers reminded those gathered that the always-express trains is just an old Chicago legend, but the scruffy man, who only identified himself as “Ol’ Pa,” assured everyone he’d seen the train “one moonless night in the 90’s.”

“I’d just seen Jean Claude Van Damme in Hard Target, an absolute classic, and I was waitin’ in the gloomy tunnels of the Chicago Red Line station. We waited… and waited… and waited, but no train ever came.” Ol’ Pa became so still that I became concerned he needed medical attention before  he shouted “AND SUDDENLY there it was, the terrible express train!” (Full disclosure, I did jump when he screamed, but it was not from fear, it was from surprise. The noise I made was not indicative of me being “scared,” as my date suggested, it’s just a noise I make if I exhale too forcefully.)

“It blew through the station unannounced, its horn blarin’ that terrible tone, the driver leanin’ out the window, cacklin like a man possessed!’” Ol’ Pa continued. “I swear I could see the souls of damned Chicagoans ridin’ in the almost empty cars. The Chicago Black Sox; Al Capone; one of the Bozo the Clowns, but I’m not sure which one; a week’s worth of Daleys; Catherine O’Leary; H.H. Holmes; a bunch of Cubs Fans. We were left with our hair tousled, lookin’ around in confusion, tryin’ to come to terms with the horror we’d just witnessed.”

Sarah Pendle, a local barista, asked Ol’ Pa “was another train immediately following?” Ol’ Pa shook his head sadly before he narrowed his eyes and spoke in a somber tone: “there was no follower, we all had to wait on the platform for the full train arrival interval time!” Several of those  listening gasped as Ol’ Pa finished his story and produced a pipe from his tattered coat (full disclosure, during this part my date grabbed my hand. I really think they’re the one!).

Lucas Robeson, a CTA employee, stopped by to remind Ol’ Pa, “for the hundredth time, you can’t smoke on the platform, sir.” Robeson informed the concerned passengers that “the express train that never stops is just an urban legend. It’s not real, it doesn’t depart from this life and drag souls to Hell, it’s not the ‘Christmas train’s evil twin,’ and there’s no cover up. Well, I mean, it’s Chicago, so there’s a little bit of cover up, but no more than usual. Go back to looking at your phones, and have a happy Halloween.”

Soon after, a Red Line train arrived, and we all stood up from sitting in a circle round Ol’ Pa and boarded the train. We didn’t speak, but considered the old man’s tale. Ol’ Pa nodded off in his seat, and I found myself briefly holding my breath as our train pulled into the next station. To my great relief, we stopped. (Full disclosure, my date and I did some light over-the-pants stuff on the train. For this, I’d like to apologize to the CTA.)