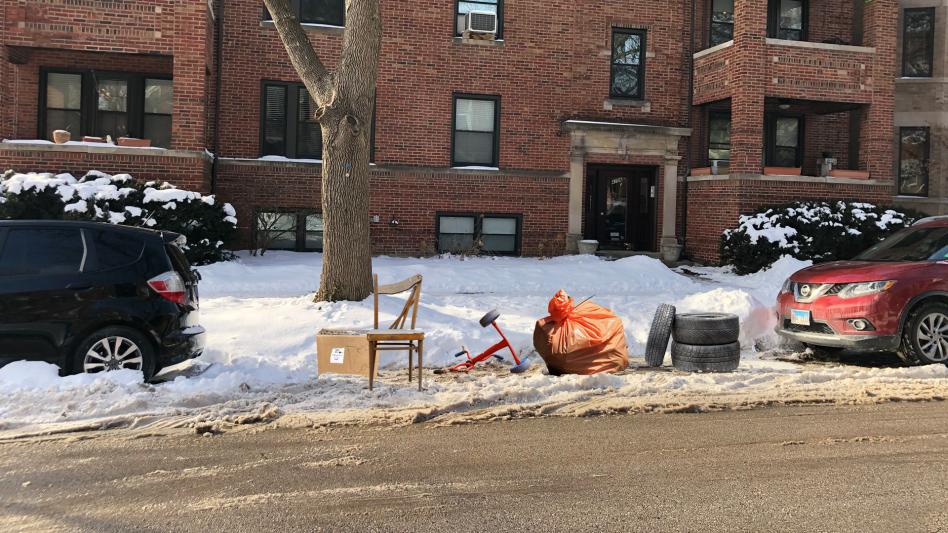 CHICAGO — With cold temperatures and snowfall finally reaching the Chicagoland area after a mild November and December, Chicagoans are having to quickly get used to the sudden Winter weather. For Chicagoans who spent the last year saving up trash to use for dibs-ing dug out parking spots this shift to snowy weather comes as a relief that keeping large items of garbage wasn’t for nothing.

“Last summer when the leg of this folding chair gave out I was thinking I was going to have to toss it in a dumpster,” said Will Graggsly, 36, a pharmacist, “but then I thought, ‘hey buddy-boy, you gotta save this primo piece of trash for dibs season!’ My wife kept telling me to toss it, and I’ll admit when it was in the fifties in December I almost did, but I’m glad I held out. Now I have this excellent garbage to put out in the street!”

Dibs, a Chicago tradition where the driver who took the time to shovel out a snowy parking spot can save it for their return by blocking it with household items, is a controversial practice around the city during the snowiest months. Few Chicagoans, even those that agree with dibs, can agree on when it’s allowed and what items can be used, though most agree that the items have to be trash.

“Yeah, it’s gotta be trash,” said Graggsly, “If I saw a parking spot with like, traffic cones or a sign or whatever for dibs I’d be like ‘fuck this guy!’ It has to be a broken chair or a rusted charcoal grill or a kids’ bike, never ridden. Honestly the sadder the trash, the more likely it is to be taken seriously.”

“I’m glad Will finally got his dibs weather,” said Carter Heyworth, 38, a friend and neighbor of the Graggsly’s, “every time I’d come over for a beer he’d take me out to the garage to show me the broken chair he was going to use for dibs. I wanted to say, ‘Will, this is just garbage, throw it away!’ but you could tell how much it meant to him so I just smiled and said ‘what a beautiful broken chair, no one’s gonna move that out of the street.’”

“Yeah, I have a garage,” said Graggsly, “but when it comes to dibs season I want a piece of the action, you know? The thrill of digging out a buried tire, of putting out your dibs and driving away, unsure if when you come back you’ll have a parking spot or if you’ll have to key someone’s car. Otherwise, why did I save all this garbage? Because I’m insane? Are you calling me insane?”