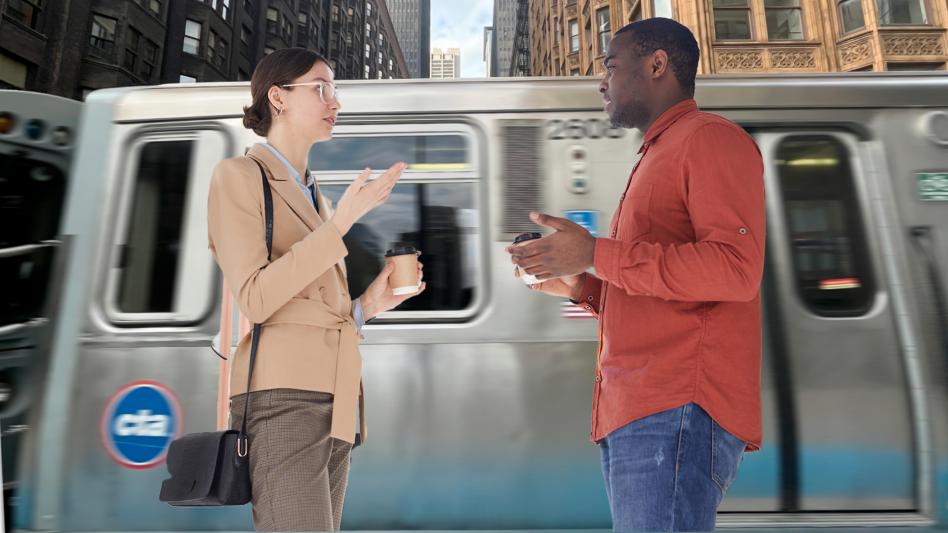 THE LOOP — Standing on the ‘L’ Train platform at the Harold Washington Library-State/Van Buren stop downtown, a conversation between two coworkers, Sam Terkel, 25 and Lisa Lobrutto, 27, has been deemed unlikely to survive the impending cacophony of a passing northbound train.

The two, who had run into each other by chance on the platform, and engaged in a stilted conversation about the new Game of Thrones series, House of the Dragon, were seemingly unaware of the particular peril that hung over their urgent disquisition.

“I like that one character who is like the main character’s cousin,” said Lobrutto to Terkel, grasping for a name that never came and consciously suppressing the thought that within the next few seconds their vital discourse would be invaded by an impermeable veil of vibration and clatter.

“Oh definitely, he’s cool.” replied Terkel confidently, not exactly sure who he was referring to.

Onlookers concluded that while the conversation may have had legs to limp along indefinitely, it was now on thin ice with the clamor of the train quickly approaching crescendo.

Lobrutto glanced at her phone, or more seemingly past it, into a psychic firmament where she strained to summon some gossamer thread of dialogue capable of surviving the 15 second interlude where the train would stop at and then depart from the platform.

“What do you think will happen in it?” Terkel deftly blurted, in the last audible second.

He then held up a finger as if to indicate a wellspring of fertile thought merely being stifled by the clash of the train.

After it came and went, with the din of the ‘L’ subsiding, the two now had plenty of time to discuss how, so given to their fog of disquietment, they had both just missed their train.