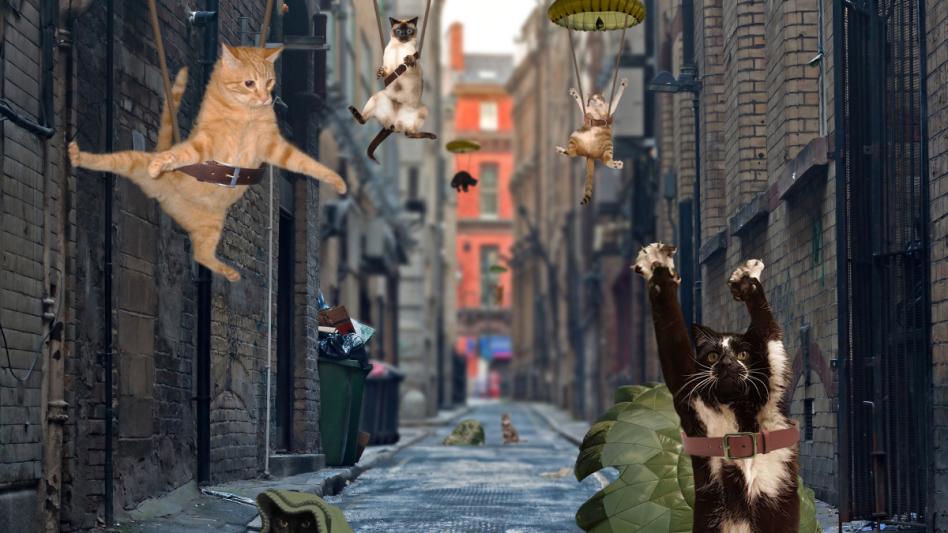 CHICAGO — A new program called Cats at Work has launched to free thousands of feral cats from Chicago animal shelters to combat Chicago’s world famous rat problem. This past weekend saw the first waves of these brave cats deployed over the Chicago area, parachuting into alleys under cover of night like cute little Marines corps.

Cats at Work, the militant arm of the Tree House Humane Society of Chicago, selected and trained thousands of cats the shelter had deemed “unadoptable” by normal society and international law.

“We’re talking the best of the worst of cats,” said Ret. Sgt. Bruce Heisenmower, 56, a volunteer at Tree House and self-described Commander of the Cats at Work program. “Cats that make Macavity from Cats look like Munkustrap from Cats. Too often, cats like these are euthanized instead of weaponized. I’ve turned these feral bastards into rat killing machines and given them second chances at life. And if they try to turn on us, I’ve implanted a bomb in each of their necks and I’m willing to use them.”

The cats were released over targeted neighborhood alleys, making the leap from a recently-purchased Lockheed C-130 Hercules military transport. Outfitted with tiny little parachutes and itty-bitty bandanas, the adorable death squads touched down and immediately went to work.

“We received a sizable donation from a certain government agency to pull this off,” said Heisenmower, “I’m not at liberty to divulge why they found this program so intriguing, but let’s just say cats are pretty hard to spot on radar.”

Though many have praised the idea as a natural solution to a common problem for urban environments, some wildlife experts worry the feral cats might turn their campaign of bloodshed toward local bird populations.

“That’s just mission creep,” said Heisenmower. “Sure, we’re going to see feral cat divisions taking out some pigeons and songbirds. But that’s the cost of war, and there’s no other way to get this job done. What is it that Sun Tzu said of revenge? ‘Before you embark on a journey of revenge, dig two graves.’ That’s one grave for rats, and one grave for birds.”

The cats will continue to be released in waves across the city until the Cats at Work forces are able to bring Chicago’s rat numbers down to Philadelphia levels. Citizens who spot the cats at work in the alleys and parks of Chicago are encouraged to salute these adorable little troopers for their service but keep their distance, at a certain point the fog of war begins to blur the lines of perception between friend and foe.