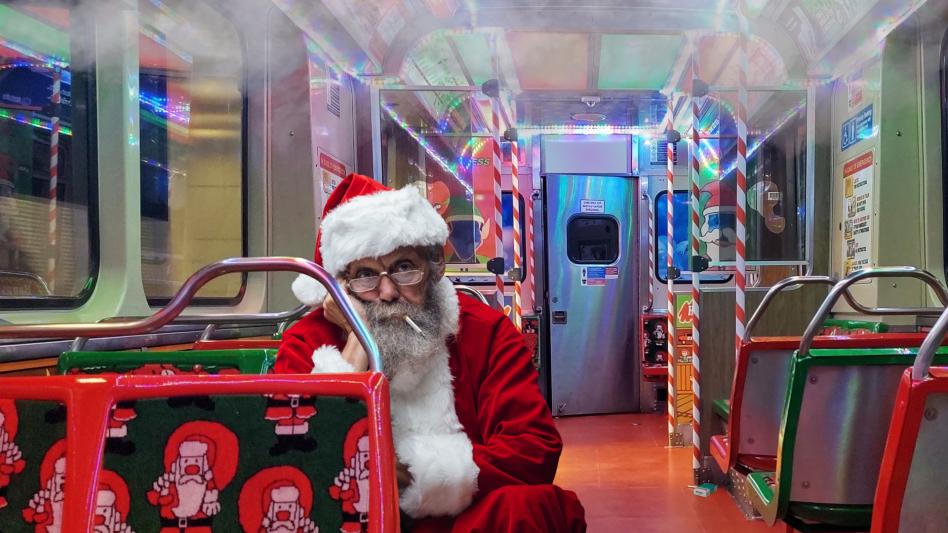 CHICAGO – As smoking on CTA trains reaches an all-time high, CTA officials are racking their brains to find a cause for it all. In recent weeks, though, the issue appears to have reached an unprecedented level of celebrity, as jolly old Saint Nicholas himself has been spotted lighting up a dart on the Holiday Train.

CTA riders were astonished on Thursday to see Santa committing such a heinous faux-pas, but Santa outright rejected these concerns. “I just don’t see what the big deal is”, says Santa Claus, Director of Global Gift Distribution for the North Pole, “I’m out here busting my festive ass trying to bring these people a little holiday cheer, but God forbid Santa gets to enjoy one merry cig without half the city taking up arms.”

When asked if he was concerned for the children who might see their beloved Holiday icon brazenly smoking three packs a day on the Green Line, Claus responded, “When it comes to squares, you’ve got to go with the Newports. You really can’t go wrong with classic menthol. Kids today want to smoke these Camel Crushes with all their fancy flavors, but I say, ‘Grow a pair and smoke a real cigarette, ya posers!’” Santa refused to elaborate or even acknowledge the question that was asked.

Some Chicagoans believe the blame for increased smoking shouldn’t fall on residents like Santa Claus. “You can’t really blame the guy. The whole thing’s just one big policy failure”, alleges Rachel Kregler, 28, “Frankly it’s not Santa’s responsibility to keep my kids safe on trains, it’s the CTA’s—and mine I suppose—but mostly the CTA’s. Until they start cracking down hard on enforcing passenger rules and regulations, the problem is only going to grow. And asking one festive mascot to give it up isn’t going to do a damn thing. Hell, I see the Easter Bunny slinging loud on the Red Line probably three times a week.”

The Chicago Genius Herald would like to note that while Kregler was delivering this statement, her unsupervised son, Bradley, proceeded to urinate on a platform elevator.

CTA officials have declined to comment on the Santa Claus situation, except for one who, speaking anonymously, maintained that the inaction is out of fear of ending up on the Naughty List this year.