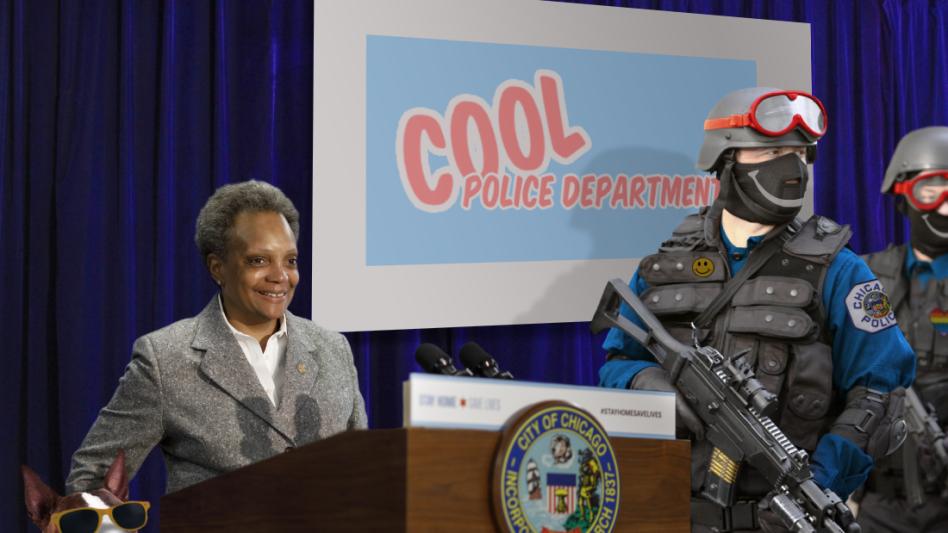 CITY HALL—With pressure from international protests mounting, Mayor Lori Lightfoot announced a new series of reforms for the CPD in a press conference early Monday. As protests and public outcry over police violence increasingly call for defunding and disbanding police departments, Lightfoot debuted her plan to “change the ‘C’ in CPD to ‘Cool.’”

Standing in front of a large, colorful banner reading “Cool Police Department” in a sort of graffiti-esque font, Lightfoot beamed as she explained her plan to reform Chicago’s oft-criticized police department.

“From now on,” explained Lightfoot, “the C in CPD stands for ‘COOL!’” Mayor Lightfoot then spent several minutes dancing and encouraging the gathered journalists and city staff to dance along with her, an homage to daytime TV host Ellen Degeneres, who Lightfoot referenced several times during her presentation.

“We need a police department that makes Chicagoans feel at ease!” exclaimed Lightfoot. “I’ve heard the voices of our citizens in the streets, and while I cannot defund the police, I can re-fun the police!”

Lightfoot then invited several CPD officers to model the CPD’s new uniform designs, which were largely identical to current uniforms, but with brighter colors and lots of hip-looking patches. Notably, the officers were more armed than before, with a sidearm pistol with “remember to verbally warn before firing” printed on the side and an exact replica of the glitter-grenade launcher seen in Birds of Prey (and the Fantabulous Emancipation of One Harley Quinn) (2020). Their body cameras now have built in speakers to play Top 40 hits, and include an aux input for arrestees to play their own music while being transported to jail.

“Now those are some Cool Cops!” quipped Lightfoot, before trying to kick off another dance break while CPD’s newest canine office, a bull terrier named “Cool Pizza Doug,” who was gently pushed onto the stage riding a skateboard while wearing sunglasses.

“I want to assure Chicagoans who are concerned with public safety that these reforms are not targeted at the way our officers interact with the community, they are merely to make those interactions as cool as possible,” clarified Superintendent of Police David Brown, who was modeling red sunglasses shaped like the Chicago flag stars. “Our main concern is upholding the public trust while keeping the seats of power that rely on strictly enforced policing to protect their capital investments happy...but that doesn’t mean we can’t have a little fun!”

In addition to the name change and outfit re-designs, the Mayor’s office has promised reforms to the CPD’s crowd control tactics, promising “more beatboxing than beatdowns” and “Pride Month themed rainbow tear gas as soon as they can figure out how to make it come out as a rainbow and not just mix together into a brown cloud.”