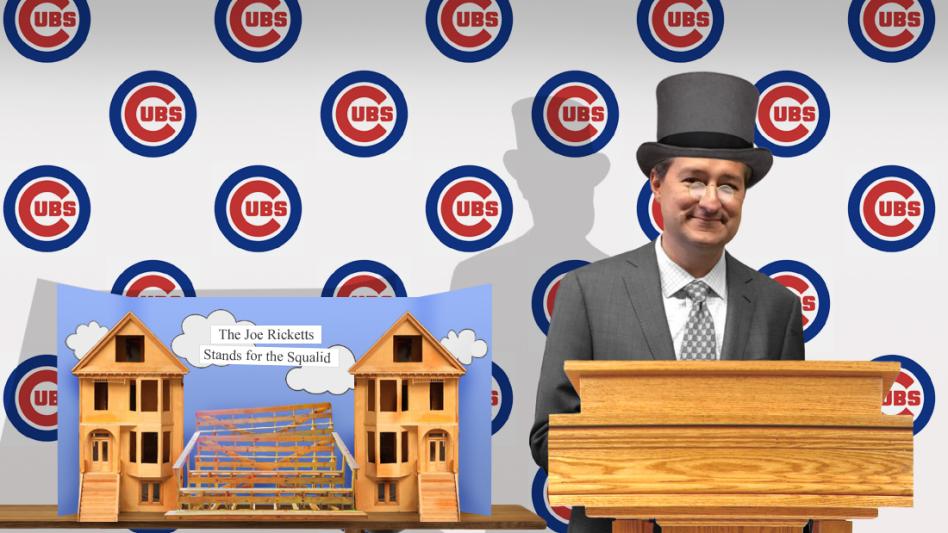 WRIGLEYVILLE—In a rare joint press conference Friday morning, Chicago Cubs board of directors chairman Tom Ricketts and his siblings Pete, Todd and Laura revealed their plans for the next phase of Wrigley Field renovations, featuring an entire stand of bleachers “to give the poors a place to sit.” Upon hearing the plan, gathered Cubs fans of all stripes let out a hearty cheer for their team and for the further transformation of Wrigleyville into a corporate hellscape.

The proposed new structure, to be called the Joe Ricketts Stands for the Squalid, will occupy the site of the former “Yesterday” memorabilia store on Addison Street, which closed last year in the wake of Wrigley Field’s celebrated transformation into an expensive and soulless garden of pleasure for Chicago’s elite at the hands of the Ricketts family.

Adjusting his beaver-skin top hat and pince-nez, Tom Ricketts explained that while the stadium might be hard to see from the new seats, “we chose the location most directly downwind of the stadium, so we won’t have to smell them.” Todd Ricketts clutched a sack with a large dollar sign printed on the outside as he reassured the entirely unconcerned crowd that “binocular rentals will be available for these peons. They won’t function, of course, but it’s another crucial source of revenue for the shareholders of your Chicago Cubs!” Upon hearing the very name of their team, the supporters listening in began singing “Go Cubs Go!” at top volume and flipped two cars on Sheffield Street.

Laura Ricketts outlined the details of the design as she shifted underneath a thick ermine cape. “I didn’t want to let my reservations about my family’s political legacy get in the way of an opportunity to participate in such naked corporate profligacy, so I specifically requested we work with the best designers on this project.” The Ricketts plan to build the stands in “the original spirit of the stadium, featuring lead paint and plumbing,” and will partner with the builders of the Hillsborough Stadium and several prison companies to benefit from the “best minds in crowd control.” Unfazed by the small army of private armed security and guard dogs emerging from Wrigley Field, the throngs of Cubs fans on Addison reached new heights of fervor, whooping and hollering for their team.

The Ricketts closed the press conference by restating their hopes that the bleachers will benefit the local Wrigley community by “providing a place for the charming locals to enjoy the Cubs at a price they might be able to afford and at a safe distance from anyone we actually care about.” The family plans to open the bleachers in the fall alongside the widely celebrated Chicago Cubs Bullet Train, a project that will connect Wrigley Field directly with the Ricketts’ underground lair and which will require the demolition of Lake Michigan.